The life of the others thanks to the organs of Nicholas

Article written by Reg Green and published in the first page of the Italian newspaper “Il Corriere della Sera” on August 23, 2018 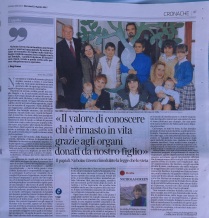 A few months ago I received an email from complete strangers that has haunted me ever since. It came from an English couple, Dave and Debbie Marteau, whose 21-year old son, Jack, was killed in a road accident in Palermo in 2009 and whose organs were donated to three Italian families. Despite repeated attempts in those eight years they have not been able to find out anything about the recipients.

The Marteaus wrote to me because my wife, Maggie, and I who are American, donated the organs of our seven-year old son, Nicholas, to seven very sick Italians, after he was shot in an attempted carjacking on the Salerno-Reggio Calabria autostrada in 1994.

Two foreign families, two identical decisions — but in our case the names of the recipients, their pictures and the stories of their rescue from the very edge of death were flashed around world and tens of millions of people realized, many for the first time, that hearts, kidneys, livers and other body parts that would otherwise be buried could instead bring dying people, many of them very young, back to full health.

Everywhere, from Russia and Venezuela to India and Taiwan, the willingness to donate was stimulated. I know because people in all those places have told me they personally were affected. In Italy alone in the following 10 years organ donation rates tripled, a rate of increase no other country has come close to and thousands of people are alive who would have died.

The difference between the two incidents is that in 1999 a law was passed that forbade healthcare personnel from revealing the identity of people involved in a transplant.

The law does not forbid the two sides from contacting each other — it would be unconstitutional if it did – but it has effectively prevented it.

The goal is laudable: to protect privacy and allow the healing process to continue for both donors and recipients. Everyone wants that. The question now is whether the law is being interpreted too rigidly for any family to find information that would help give it peace of mind.

Among other objections, opponents of change often say that if the transplant fails, the donor family may experience again the pain of losing their own loved ones. Maggie and I have personal experience about that. Two of Nicholas’ recipients have died but we have never felt we were losing him again, only the sadness of losing two other brave people with whom we had a bond.

Even then the loss was eased by their families’ gratitude that their loved one had that second chance. After the transplant, Andrea Mongiardo, the boy who got Nicholas’ heart told everyone he now had a Ferrari inside him now instead of a patch-up old jalopy. Valentina Lijoi, a cousin of his, smiled when she told me that story after Andrea died and I told her I feel sure it will make me smile too till my dying day: a beautiful shared moment and surely therapeutic for both of us.

Every country has to decide what degree of connection is desirable but I am convinced that as a general rule letting the two pairs of families, working with their doctors, make that decision offers by far the best chance of success.

In the United States, the two sides can contact each other if both want to – but only if both want to. The first contact is normally by anonymous letter, sent through the hospital, so that neither side can identify the other. The letters are read by their doctors to make sure there are no problems — that one side, for example, is not likely to make demands that the other does not want.

In time, if all goes well, they can reveal their names. Typically, they exchange stories that warm each other’s hearts. The recipients say what they can do that they were too ill to do before the transplant. The donor families describe what the donors’ favorite sports were, if they had children, tell anecdotes.Their doctors are ready to help resolve any friction that might occur and either party can break off contact at any stage.

Elling Eidbo, CEO of the Association of Organ Procurement Organizations, the US government-appointed organizations that administer these programs, says most donor families interact with their recipients in some way. These organizations, which work closely with hospitals all across the country, confirm that in the large majority of cases the results are positive: they help recovery not hinder it.

As a foreigner, it is not my place to make recommendations but I have a question about how the law is being applied: is preventing the few cases that go wrong worth denying every Italian family who wants it the consolation of knowing more about the people who saved their lives or whose lives they saved?

Filed under In the news, Italia, Italy, Nicholas' story, Uncategorized