George Marcello, Canada’s most tenacious advocate for organ donation, has died aged 65, after a long illness made worse by his refusal to slow his relentless campaign to raise awareness of the worldwide shortage of donated organs. In the 27 years that I have been traveling the world for the same cause, I have never met anyone who gave more of himself to organ donation. Working mostly alone, he took up the cause when his own life was saved in 1997 by a donated liver. He walked thousands of miles across  Canada carrying a torch — the Torch of Life, he called it — attracting a following in whatever community, large and small, he walked through. One of those who wanted to know more was Pope John Paul II who blessed the torch when he gave an audience to George in Rome in 2001. 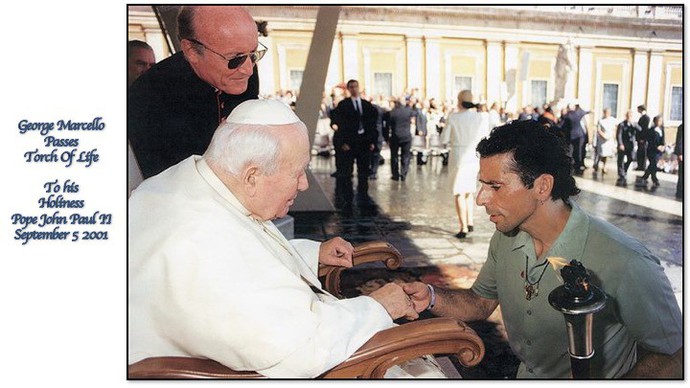 Among his many initiatives was bringing together the family of Palestinans, whose son was shot by mistake by an Israeli soldier and whose organs went to Israeli children, and the mother of a British Jew who was blown up by a Palestinian terrorist, one of whose kidneys went to a Palestinian. I don’t know anyone else who would have thought of that powerful lesson for humanity and had the iron determination to make it happen.

Filed under In the news, Stories, Uncategorized