I have just spent a week in the company of a man whose experiences throw a fresh light on the Israeli-Palestine conflict. He is Ismael Khatib, the 46-year-old father of Ahmed, a 10- year old boy who was shot six years ago, in the tense West bank city of Jenin, by an Israeli soldier who, on a day of rioting, saw him among a group of other boys holding what looked like an automatic rifle. It turned out to be a plastic model.

Ahmed was taken to the Rambam hospital in Haifi where he was declared brain dead. The doctors then did what their counterparts in hospitals all over the world now do routinely. They asked Ismael and his wife, Abla, if they would donate their son’s organs to whoever was at the top of the waiting list, which is compiled regardless of race or religion. The Khatibs consulted their religious leaders — who signaled their agreement – and their donation leapt what is probably the most bitterly-divisive barrier in the world, Ahmed’s organs going to six Israelis, all of them small children, four of them Jews. I met Ismael when we were together on a tour of Eastern Canada which included talks with Muslim, Jewish and Christian communities. It was arranged by George Marcello of Toronto, who has had two liver transplants and has walked across Canada carrying a torch – subsequently blessed by Pope John Paul II — to tell everyone who will listen that tens of thousands of people around the world die every year because of the shortage of donated organs. George, lion-hearted in determination and achievement, is one of those remarkable recipients who cannot rest until they have paid back everything they can think of to a world that has shown them such unexpected selflessness.

In the hate-filled atmosphere of the Palestinian question, where every action is weighed by the committed on both sides to see what propaganda can be wrested from it, the implications of saying ‘yes’ to organ donation are profoundly ambivalent. Some Palestinians are embittered about Ahmed’s organs going to Jews. Many others are using the donation quite cynically as a way of claiming a moral ascendancy over their enemies and advancing their cause in its wake. Given the intensity of the conflict, everyone involved can be presumed to have mixed emotions.

But what is perfectly clear is that to take the organs of a dead person, put them in the bodies of several others who are dying and out of that produce a crop of healthy lives is a triumph for humanity. 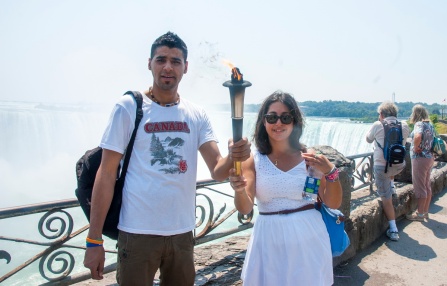 Yael Gladstone, seen here at Niagara Falls, is the sister of Yoni Jesner, a Jewish pre-medical student from Glasgow who was killed when a Palestinian suicide bomber blew up the bus he was traveling on when visiting Tel Aviv. Next to her is Khaled Khatib from the Palestinian town of Jenin, whose ten-year old brother, Ahmed, was shot by an Israeli soldier who thought the plastic replica of an assault gun he was holding was real. Both families donated their son’s organs. One of Yoni’s kidneys went to a seven-year old  Palestinian girl. Six of Ahmed’s organs went to young Israeli children, four of them Jews. Yael and Khaled are holding the Torch of Life that George Marcello, a Canadian who has had two liver transplants, has single-handedly made an international symbol of the power of organ donation to bridge even the world’s most bitter divisions. He has walked across Canada carrying it, showing it in hundreds of towns and villages, and took it to Rome, where Pope John Paul II blessed it.

We can hope too that transplantation, with its ability to scrupulously avoid discrimination, will also be a stepping stone in bringing the whole world a little closer together. Since meeting Ismael I often think of Yoni Jesner, a 19-year-old Scottish Jew, who was killed by a suicide bomber in Tel Aviv in 2002 and one of whose kidneys went to a seven-year-old Palestinian girl.

The closing event on our tour added one more dimension, a talk to the  governing council of an aboriginal community, the kind of society that from time immemorial has believed that tampering with the body is taboo. Now, it turns out, almost all of them have signed donor cards. For them also a medical miracle has modified the beliefs of all those accumulated generations and life has trumped death.

Filed under Book: 87 and Still Wandering About, Stories